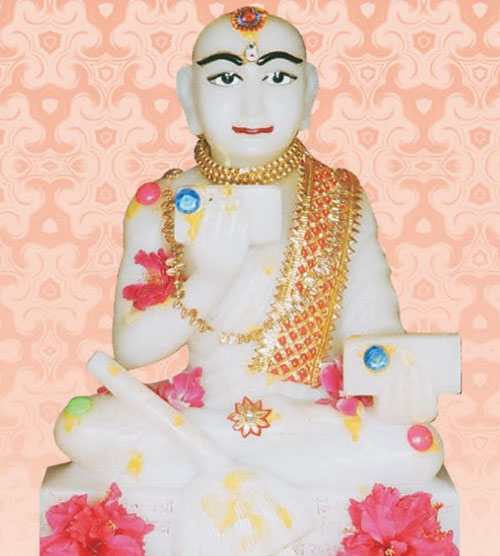 17th century witnessed the emergence of many great Acharyas. Dada Shri Jin Chandra Suri was one of them and is widely known as Akbar Pratibodhak.

He was born in Samvat 1595 in the hindu month of Chaitra in a village called Khetasar in the former Jodhpur State. His parents, Seth Shrivant Shah and Shridevi named him Sultan Kumar, and his gotra was Rihad.

In Samvat 1604, the leader of the Khartar Gacch at that time, Jin Manakya Suri, came to the village. Sultan Kumar attended his discourses daily and took on learning more about Jainism. His parents soon noticed that his playfulness had disappeared and he had become vaguely indifferent to worldly affairs. On enquiring he confessed to his parents that he wanted to live his life learning about Jainism and preaching its ideals to the world.

In a short span of time, Muni Sumati Dhir became well versed in the knowledge of Aagams. He then traveled with Jin Manakya Suri, spreading the message of Jainism and inspiring many people to follow Jain lifestyle.

In Samvat 1612 in the hindu month of Ashadh, Jin Manakya Suri passed away. Shortly after his guru's death, Shri Gunprabh Suriji proclaimed seventeen-year-old Sumati Dhir Muni as Jin Manakya Suri's successor in Jaisalmer. From thereon, he came to be known as Jin Chandra Suri.

The ceremony was held with great zeal and fervour and it was all arranged by Maharaval Maldev. On that very night, looking to the deep devotion to the teacher, Jin Manakya Suriji appeared to him.

Even in the prime of his youth, he remained steadfast in self discipline and working towards the upliftment of Khartar Gach. He was a great reformer who instituted strict new rules for mendicants and ably defended the Khartar Gacch against its detractors.

While in Bikaner, Acharyashri declared that monks who cannot observe self discipline, may well retire from monkhood and become a householder. There is no place of nay relaxation in the strict self discipline of the monkhood. All those who were unable to live upto the strict practices of monkhood were asked to put on the clothes of a house-holder and were given the name of ‘mathren mahatma’. Some of them began to earn their livelihood by painting while others by writing or teaching.

With the help of Shri Sangram Singh, a minister in Bikaner, in the hindu month of Chaitra in Samvat 1614, he framed many rules for strict observance of the duties of a jain monk and made it mandatory for all monks in Khartar Gach sect to follow.

In a short span of time, he brought about revolutionary changes in society, religious administration and religion. At the age of nineteen, undertaking this onerous responsibility and succeeding in implementing changes for the upliftment of Khartar Gach was highly praised by everyone.

Once, Dada Jin Chandra Suri sojourned at Nadlai, where the Moghul army was positioned. The havoc created by them had led people homeless and scared. Jain families were seeking shelter and security. Without an iota of fear, Dada Jin Chandra Suri retreated to dhyan in the midst of the chaotic atmosphere. His spiritual powers drove out the Moghul army and establish peace all over again in Nadlai.

Once, Dada Jin Chandra Suri came to Ahmedabad. He met two brothers, Shivaji and Somji, who belonged to Dasha Porwad sub-caste. The brothers sold melons for a living.

Dada foresaw their future which was going to bring lot of weath in their lives. Sudden rise to richness can result in greed and disparity between brothers. He enlightened them on religion and values, which one should give utmost importance through all ups and downs of life.

One day, Suriji and Somji came to Gurudev and said that they couldn’t practice many religious vows as their financial situation didn’t allow them to do so. Gurudev told them that one day the fruits of your hard work will bring you prosperity.

It so happened that the Moghul army came to Ahmedabad in those days. It was summer. Army men searched for melons and watermelons all across town but could not find any. At last, they came to the two brothers who had priced the melons at one gold coin per melon. Despite being very expensive, their whole stock of melons was sold. Suriji and Somji became very rich, and considered this wealth a blessing of Gurudev. In his honor, they took out a pilgrimage to Palitana, and built a tempe of Lord Shantinath in Ahmedabad. Acharyashri Jin Chandra Suri’s name is mentioned in the inscriptions of this temple.

Word of his extraordinary qualities eventually reached the court of Akbar the Great. The emperor invited Jin Chandra Suri to Lahore, where he arrived in the hindu month of Phalgun in Samvat 1648, along with his 31 disciples.

Emperor Akbar held a grand reception which gathered thousands of men and women. The king was greatly impressed by the teachings of Acharyashri and heard his discourses daily in the courtyard of the palace. Akbar developed faith in Jainism and thought highly of the disciplined life of Acharya Jin Chandra Suri. As a result, Akbar issued orders eschewing the killing of animals in his state.

At one point Akbar's son, Salim, had a daughter who according to the astrologers was inauspicious for the father and urged that the infant should be abandoned or killed. Because of Jin Chandra Suri's teachings, however, Akbar instead had a snatra puja performed in the Shanti Nath Jain temple in the hindu month of Chaitra to ameliorate the problem. Because of Jin Chandra Suri's influence Akbar protected Jain places of pilgrimage and gave orders that the ceremonies and observances of Jains were not to be hindered. He also forbade the slaughter of animals for a period of one week per year.

Once when Jin Chandra Suri was entering court he suddenly stopped. When Akbar asked him to proceed he said that he could not because there were jivs in an underground drain and that he could not walk over them. An envious Qazi had in fact concealed a goat there. The Qazi asked "how many jivs?"and the monk said "three." The Qazi was quite surprised because he had placed only a single goat there, but when the drain was opened there were indeed three. The goat had been pregnant and had given birth. Akbar was duly impressed.

In another, similar incident, a Qazi tried to discredit the monk by using mantra -power to cause his own hat to fly-up into the air and hover there. The monk sent his ascetic's broom flying after the hat; the broom retrieved the hat and set it back on the Qazi's head. This incidence not only strengthened Akbar’s faith in Acharya Jin Chandra Suri but also led to Qazi becoming his staunch follower.

And once, when asked the date by some Maulvi (a Muslim scholar), one of Jin Chandra Suri's disciples had mistakingly said that it was poonam (the full moon day) when it actually was amavas (new moon day). The Maulvi then went around the city saying mockingly that a Jain monk had said that a full moon would appear in the sky on the new moon date. Even the emperor Akbar heard of this, and so for the sake of Jainism's reputation Jin Chandra Suri had to do something. That night he obtained a gold platter from a layman's house and threw it into the air where it shone like the moon. Akbar had the light tested, and it was discovered that the "moon" remained full for a distance of twenty-four miles.

Once, Akbar asked his Minister Karam Chand, “What is highest honour that can be bestowed on Acharya Jin Chandra Suri?” Karam Chand, then, narrated the life of Dada Jin Dutt Suri and that he had been given the status of “Yugpradhan’ by Goddess Ambika. Eventually, Akbar bestowed the title Yugpradhan on Jin Chandra Suri.

With the inspiration of Acharya Jin Chandra Suri and on his insistence, Akbar had imposed a ban on cow slaughter for six months in the region governed by him. He also declared the Jain prilgrimage of Shatrunjay tax free zone.

Akbar appealed to Acharya shri to subjugate 5 Pirs residing at the confluence of 5 rivers. Acharya shri recited some mantras and subdued the Pirs. They all were deeply influenced and become devotes of Gurudev and assisted him in the work of administration.

Ministers like Sangram Singh, Karam Chand, congregation leaders like Somji and Shivaji, Theru Shah Bhansali, and many followers were the devotees of Guru Dev. Many kings and nobles had faith in Gurudev and carried out all the work instructed and inspired by Gurudev.

Akbar's son and successor, Jahangir had once seen an ascetic in Jain dress engaged in some kind of dubious conduct, and as a result, in 1611, he ordered that all Jain monks should become householders or be expelled from the empire. Hearing of this, Jincandrasuri rushed to Agra to meet with the emperor. In order to prevent a breach of his imperial order, Jahangir forbade the monk to use the imperial road. Jin chandra suri thereupon spread his woolen mat on the Jumna river and floated to his imperial audience. The emperor was surprised and pleased. The monk then made the point that the entire Jain community should not be held accountable for one person's fault, and the emperor, agreeing, rescinded his earlier order.

While staying in the Marwari village of Bilada for chaumasa, Jin chandra suri realized that his end was near. He called his disciples and lay followers together and informed them of his impending death. He named his successor and died in the hindu month of Asoj.

The whole body of Acharya Jin Chandra Suri was engulfed by fire but a piece of cloth didn’t burn. People were greatly amazed at this miracle of Acharya shri. At the place he was cremated, the congregation built a grand Samadhi Mandir.